Back in 2019, my laptop’s internal HDD crashed taking down 2TB worth of data with it. Most of the older data was recovered from my backup HDDs, but I lost the recent data which was not present in the backup HDDs. The data loss included a part of my master’s thesis, photos taken in 2019 and a lot of code which I did not publish on Github. This happened because I was too lazy to copy the data to my external backup hard disk and sort it.

This incident made me buy multiple hard disks for better redundancy but from past 2 years I’ve been manually coping data to and from the backup drives. These drives also contain a lot of sensitive data hence I had to keep them physically safe from others.

Inspired by this article, Don’t use fancy tools, I’ve decided to come up with a backup solution for myself which I will cover in some other post. This post aims to be a guide on backing up the most critical and sensitive data to the cloud.

Solutions like Google Drive, OneDrive or Dropbox are great but they are too expensive for my use case. I want a Cloud storage where I can simply upload and forget, only access it in case something happens to my backup hard disks.
Object storage, specifically BlackBlaze B2, seems to be a good for long term backup.

Back in 2010, I use to create a .zip files of the data I wanted to protect, but now given the size of data and possibility of a large single file getting corrupted I’ve decided to go with GoCryptFS as the encryption program.
It is crucial to have your personal files encrypted when stored on the cloud, you never know about another iCloud hack..

What is Backblaze B2 Cloud Storage?

According to IBM, object storage is a data storage architecture for handling large amounts of unstructured data such as video, photos, audio files, documents, sensor data, etc. In the object storage the data is stored in a structurally flat data environment and the hierarchical filesystem model is not followed.

On the inside, each object include data and it’s metadata information such as unique ID number instead of file names or path.
The best part of object storage is the pay-as-you-go structure, where we have to pay only the amount of storage used. It also offers virtually unlimited storage.

AWS S3 and Backblaze B2, both are object storage. Upon price comparison you’ll find that Backblaze B2 is significantly cheaper than AWS S3. That is why we are selecting B2 as our storage option. 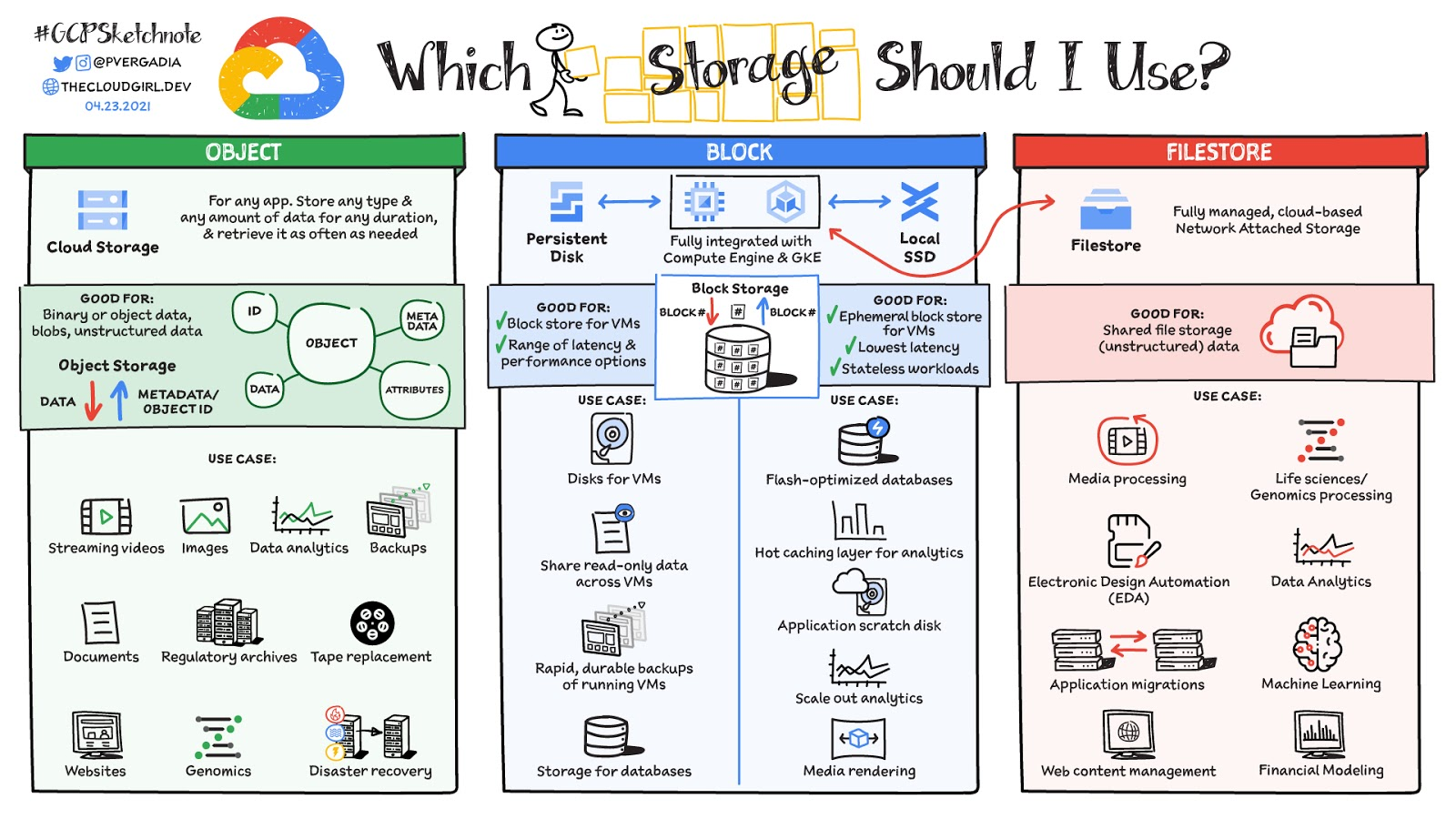 Rclone is a powerful and actively managed open-source command line program written in GoLang. It is generally used to manage files on cloud storage. It covers various types of storage options such as Dropbox, Google drive, AWS S3, etc.

It has various features such as file harsh verification to maintain data integrity, sync files between local and the cloud storage, check the hashes for missing/extra files, a beautiful web based GUI, etc.

In our use-case, we need something which might keep my cloud storage in sync with the local changes. That is why we’ll mostly use the sync option.

When you wish to store something sensitive either on the cloud or in a external disk, it’s advised to encrypt the content before it hits the cloud servers/HDD.

According to the project’s webpage, GoCryptFS uses file-based encryption that is implemented as a mountable FUSE filesystem. Filesystem in USErspace (FUSE) is a software interface for Unix and Unix-like computer operating systems that lets non-privileged users create their own file systems without editing kernel code. For GoCryptFS this means that on disk the files will be stored in encrypted format, but when mounted and a correct password is provided, these files are accessible in unencrypted form.

The only fear I have of using GoCryptFS is being locked out of my files due to some issues like the program might not be actively maintained in the future or a file might get corrupt while getting encrypted.

Despite all this as of now, GoCryptFS is the best file level encryption tool.

Configure the Object Storage with Rclone

Register at https://www.backblaze.com/b2/cloud-storage.html. Make sure to read the pricing details and your usage statistic.

Use rclone config to configure B2 object storage. Follow this guide: https://rclone.org/b2/.

Go to Blackblaze B2 website and click on App keys and generate a new set of keys for rclone. 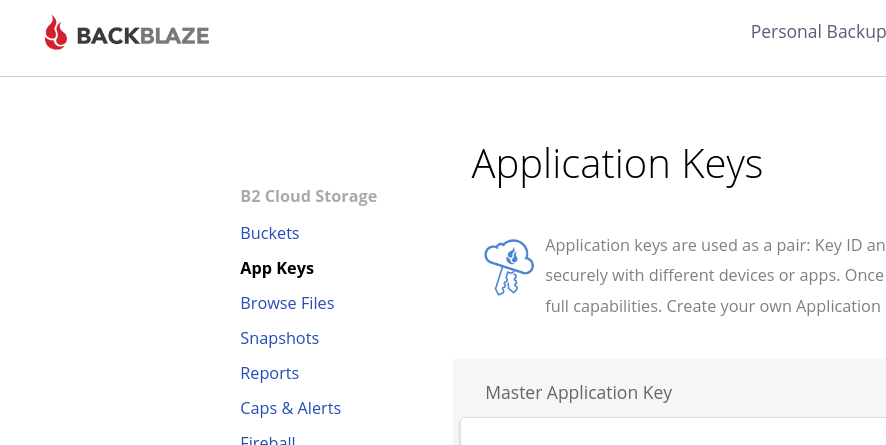 Add a new Application Key and copy the key ID and set it up in rclone. 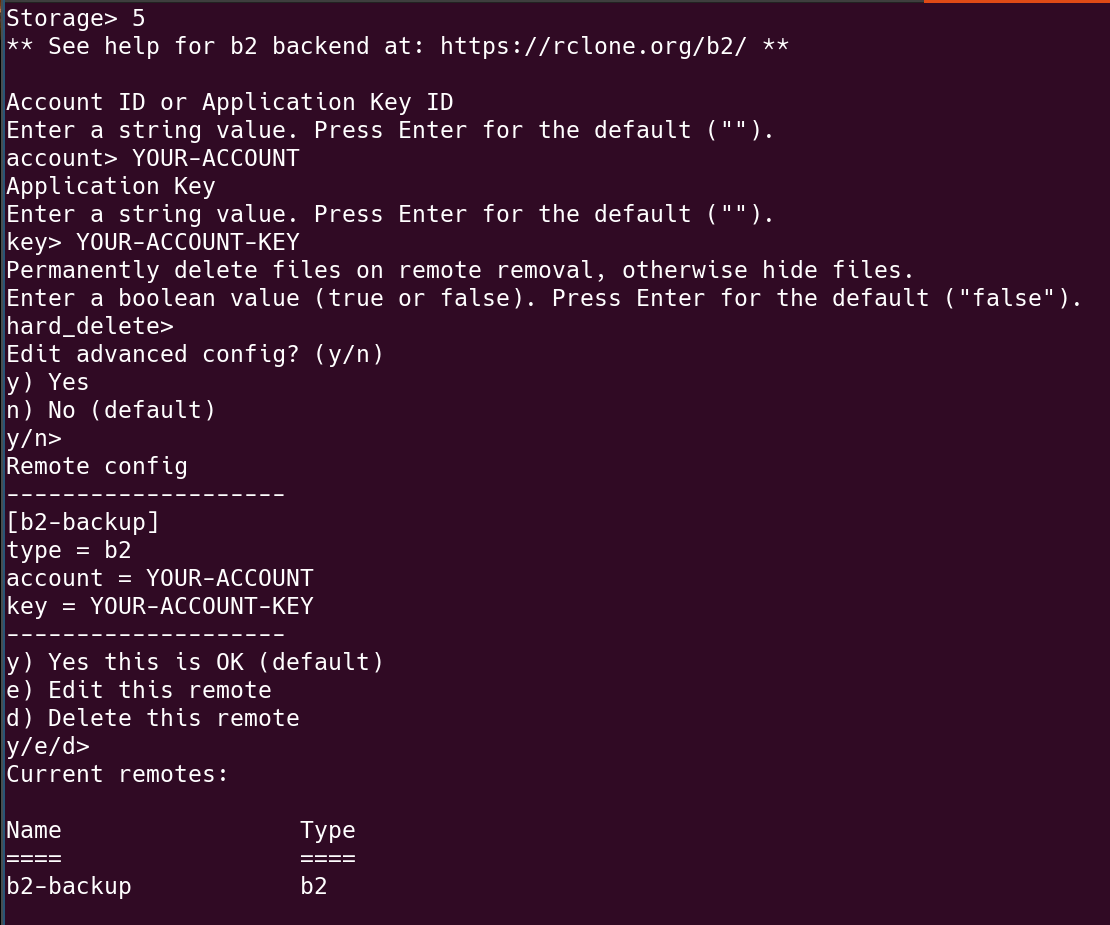 The name of the remote is b2-backup. I can use this name to connect with the Blackblaze server and perform operations like sync, dir list, etc.

Make sure to use - instead of _ for the bucket name.

Please make sure to copy and securely save the master-key. This key will be used to recover files incase you forget the password.

Make sure to store the key properly and safe.

Copy and paste files in the private directory and the encrypted counter part will be reflected in the backup-crypt directory.

Once all the files are copied over, we can unmount the filesystem.

Just make sure that you keep eye on the free limits in B2. Anyway, there is no limit or cost in uploading the files to B2. 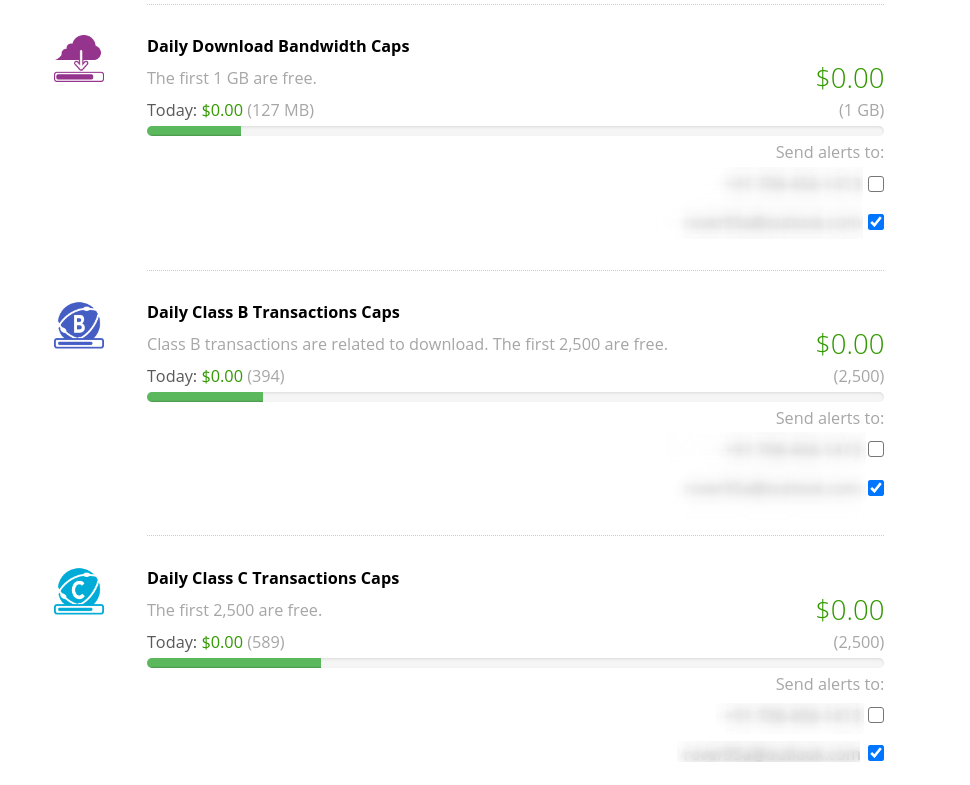 Now we can sync these encrypted files with the B2 storage.

--transfers 20 will do 20 simultaneous transfers, the default is 4. See B2 Transfer section for more info

The worst thing that can happen in this system is that you’ve put an all-out effort to backup your files but in case of a disaster you are unable to recover the files.
This is why it’s utmost important to test your recovery options and document the process before you upload the files to the cloud.

The master key is printed just once when we initialize a new gocryptfs directory.

When recovering the files using master-key, please make sure that you have the gocryptfs.conf file present in the directory.
If the config file is missing, please generate a new config file using gocryptfs -init and copy it to the recover.crypt directory.

Encrypt files only on Cloud but not on HDD?

Make use of reverse mode

The files present in the secret_dir are unencrypted and stored on your disk, whereas the mounted filesystem on secret_dir.crypt will have encrypted files which can be uploaded to Cloud storage.

I have not tried to recover the files using master-key in the reverse-mode. I’ll update the post when I’m done with the test.